The publisher of the BioShock series, 2K Games, has begun uploading instructions on how to make your own LEGO versions of several “iconic parts” of the series, starting with the Songbird from BioShock Infinite.

It’s part of series of small LEGO builds the publisher is calling “MiniShock”.

The Songbird shown off is from the builder Imagine Rigney who was recently interviewed by 2K about his creations and the massive BioShock layouts he has created out of LEGO.

While the official blog post will link you to a downloadable zip file of a single page PDF, we’ve taken the liberty of embedding the instructions directly from the builder’s Flickr account below. 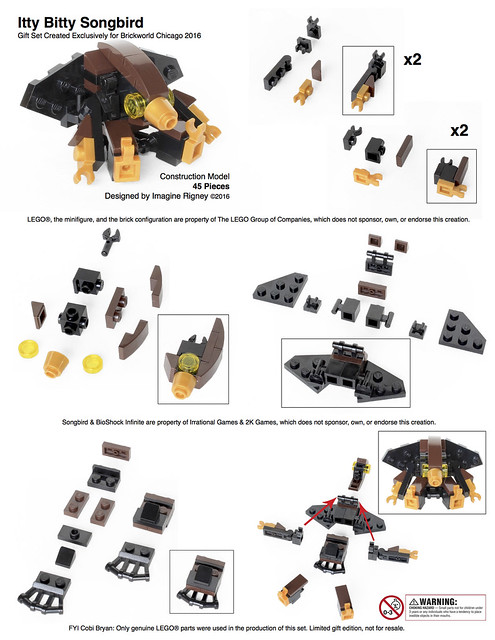 Aside from this being really cool and a great way to pick up some new toys, it’s newsworthy for a few reasons.

Firstly, LEGO doesn’t hold the license for official BioShock sets about at the moment. This is likely due to the series’ adult themes. 2K seems acutely aware of this, as the entire blog post announcing MiniShock never once uses the word “LEGO”.

On the flip side, it’s refreshing to see a publisher celebrate fan creations and share them with the community. If, like us, you’re excited about more MiniShock builds, we suggest you keep checking back to the 2K blog or follow them on Twitter.

If you need your BioShock LEGO fix right now, check out Rapture in microscale, a motorised Sky-Hook or this Big Daddy. Oh, and if you’re in the market for a couple of games, The BioShock Collection was recently released for Xbox One, PS4 and PCs – it’s really rather good.

LEGO’s first attempt at a classic Hulkbuster is hilariously derpy

Celebrate Chex Quest HD with a 3D print of the Zorcher

AidaForm: A service that helps to optimise the hiring process

Get your next gaming monitor from AOC’s leading range

This wearable Cappy from Super Mario Odyssey has moving eyes

Build an Arduino-powered automated laser system to entertain your cats

LEGO Raspberry Pi machine appraises your Magic cards for you

This 3D printed Matrix of Leadership is based on the Bay...