The exciting announcement that we’re going to be getting LEGO sets based off of Overwatch was dampened somewhat with no official images of the sets being shown yet.

Thankfully the LEGO community has been has been making Overwatch creations since before the game even launched, so we have a wide swathe of possibilities out there when looking at possible sets.

The builds we feature here are all taken from Flickr where LEGO creations are usually hosted by talented builders.

Make sure to click on the images to be taken to Flickr so you can see more builds from the same users.

BrickHeadz are LEGO’s attempt to cut into the Funko Pop! market with extremely stylised characters from Marvel, DC, and much more.

Instead of the bulbous heads of Funko, you’re getting square noggins that fit in with LEGO bricks.

User curtydc has already used this BrickHeadz style to recreate Pharah, Torbjorn, Widowmaker. and Bastion. The latter two can be seen below. 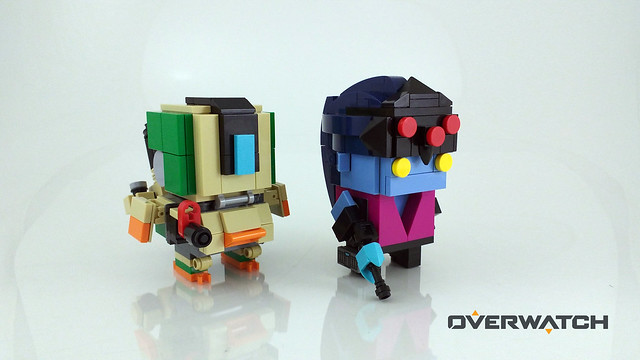 While this seems like the obvious route to go, the press release announcing the Blizzard / LEGO partnership specifically mentions “building sets across various price points”.

This is important to remember with BrickHeadz because all of them are priced the same: $10 for single characters and $20 for a double pack.

That being said the BrickHeadz line was recently expanded to into a DIY set called Go Brick Me that retails for $30, so maybe it’s not a completely dead lead.

Since 2010 LEGO has been creating unique minifigures that can be bought outside of their sets.

These minifigures are usually given extra detailing to make them more desirable, which is a big factor here as they’re sold in blind bags.

This has been adapted for many different properties, such as Disney, The Simpsons, and even the German soccer team.

This makes a perfect fit for the character-focused Overwatch, as each blind bag could contain one hero as a minifigure.

User Biao Custom gives us a look at this with figures that have been modified with standard modelling techniques instead of brick builds.

Larger characters could be turned into what LEGO calls “big figs“, which were used most recently for Cull Obsidian and Thanos in Infinity War sets.

Another user, Kaiju Dan, has turned Roadhog into a big fig, and it looks great.

The pricing details mentioned with the BrickHeadz presents the same problem here: all the collectable minifigures are priced the same. There may also be the issue of another company owning the rights to make action figures.

This is a current, weird, setup you can see with Star Wars. LEGO can’t sell minifigures on their own as other companies own those rights, but they can bundle the minifigures together with small buildable terrain and vehicles.

We may see this happen with Overwatch too: sets where the focus is on the minifigures, but there’s also small recreations of popular maps.

One obvious way to sell LEGO heroes to the public would be as one character per set that you can then build.

Korean user 한 성욱 has done the best job of showing us what this would look like. They’ve completed eleven heroes so far, all rendered with incredible detail using only LEGO.

Here’s a snapshot of a few of the builds. If you’re wondering, yes: the D.Va does fit inside of her mech, and the Bastion does transform into sentry mode. 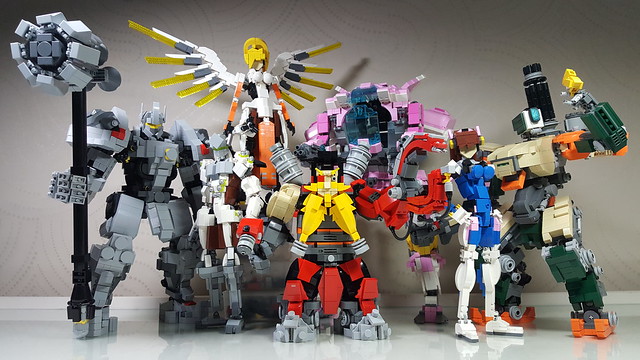 This large scale and amount of pieces per hero is unlikely, however, as they would drive the prices of sets up far too high.

We may see more reasonable renditions, such as this D.Va that accommodates a minifigure and a simplistic Zenyatta.

Less exciting would be a duplication of what happened with Adventure Time. Set 21308 which contains eight small builds that, while capturing the look and feel of the characters, just leaves a lot to be desired.

A portmanteau of “constructable action figures”, sets in this range will look very strange to you if you haven’t been buying sets in recent years.

They built off of the famed Bionicle line with improvements made in its followup – Hero Factory.

It makes use of skeletal frames with ball joints, to which you attach armour and other body parts sometimes called shells. It’s a far cry from the normal stud and hole system.

One of constraction’s advantages is larger characters for less money. The pieces in these sets are bigger than the common bricks, but the resulting builds are usually less solid.

This is a perfect fit as you get a single character per box which can then be assembled and posed thanks to the ball joints affording so much articulation.

Rondo Productions shows us what this could like like with Overwatch with two heroes in Reaper and Winston. Which can be viewed above, rightly winning an award at a LEGO show.

Level up your audio experience with this discount code for 1MORE

12-year-old builds a Braille printer out of LEGO

Woman makes robot to help her “deal with it”

We may be getting a Futurama LEGO set in the, erm,...